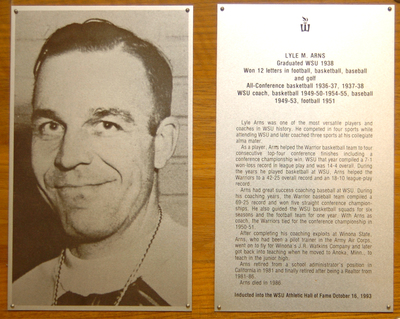 Lyle Arns was one of the most versatile players and coaches in WSU history. He competed in four sports while attending WSU and later coached three sports at his collegiate alma mater.

As a player, Arns helped the Warrior basketball team to four consecutive top-four conference finishes including a conference championship season during which WSU compiled a 7-1 record in league play, and a 14-4 over-all record. During the years he played basketball at WSU, Arns helped the Warriors to a 42-25 over-all record and an 18-10 record in league play.

After completing his coaching exploits at Winona State, Arns, who had been a pilot trainer in the Army Air Corps, went on to fly for Winona’s J.R. Watkins Company and later got back into teaching when he moved to Anoka, Minn., at the junior high level.

Arns retired from a schools administrator’s position in California in 1981 and finally retired after being a realtor from 1981-86.