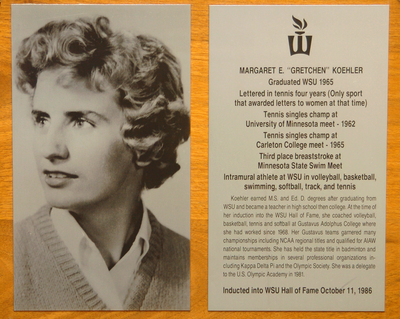 Koehler earned M.S. and Ed. D. degrees after graduating from WSU and became a teacher in high school then college. At the time of her induction into the WSU Hall of Fame, she coached volleyball, basketball, tennis, and softball at Gustavus Adolphus College where she had worked since 1968. Her Gustavus teams garnered many championships including NCAA regional titles and qualified for AIAW national tournaments. She has held the state title in badminton and maintains memberships in several professional organizations including Kappa Delta Pi and the Olympic Society. She was a delegate to the U.S. Olympic Academy in 1981.