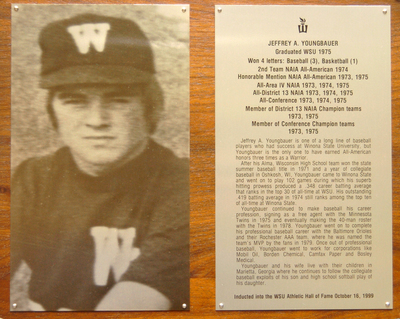 Jeffrey A. Youngbauer is one of a long line of baseball players who had success at Winona State University, but Youngbauer is the only one to have earned All-American honors three times as a Warrior.

After his Alma, Wisconsin High School team won the state summer baseball title in 1971 and a year of collegiate baseball in Oshkosh, WI, Youngbauer came to Winona State and went on to play 102 games during which his superb hitting prowess produced a .348 career batting average that ranks in the top 30 of all-time at WSU. His outstanding .419 batting average in 1974 still ranks among the top ten of all-time at Winona State.

Youngbauer continued to make baseball his career profession, signing as a free agent with the Minnesota Twins in 1975 and eventually making the 40-man roster with the Twins in 1978. Youngbauer went on to complete his professional baseball career with the Baltimore Orioles and their Rochester AAA team, where he was named the team's MVP by the fans in 1979. Once out of professional baseball, Youngbauer went to work for corporations like Mobil Oil, Borden Chemical, Camfax Paper and Bosley Medical.

Youngbauer and his wife live with their children in Marietta, Georgia where he continues to follow the collegiate baseball exploits of his son and high school softball play of his daughter.