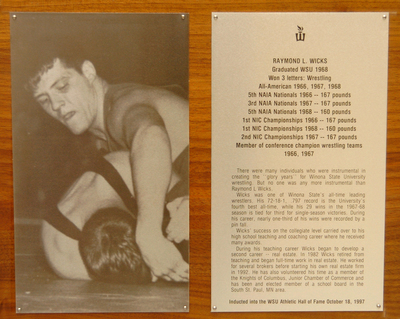 There were many individuals who were instrumental in creating the "glory years" for Winona State University wrestling. But no one was any more instrumental than Raymond L. Wicks.

Wicks was one of Winona State's all-time leading wrestlers. His 72-18-1, .797 record is the University's fourth best all-time, while his 29 wins in the 1967-68 season is tied for third for single-season victories. During his career, nearly one-third of his wins were recorded by a pin fall.

Wicks' success on the collegiate level carried over to his high school teaching and coaching career where he received many awards.

During his teaching career Wicks began to develop a second career -- real estate. In 1982 Wicks retired from teaching and began full-time work in real estate. He worked for several brokers before starting his own real estate firm in 1992. He has also volunteered his time as a member of the Knights of Columbus, Junior Chamber of Commerce and has been an elected member of a school board in the South St. Paul, MN area.