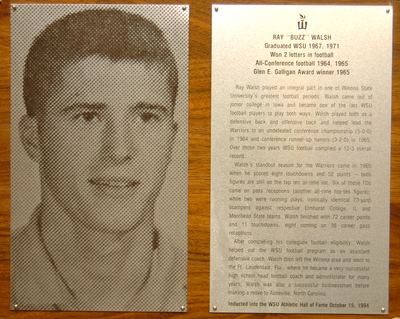 Ray Walsh played an integral part in one of Winona State University’s greatest football periods. Walsh came out of junior college in Iowa and became one of the last WSU football players to play both ways. Walsh played both as a defensive back and offensive back and helped lead the Warriors to an undefeated conference championship (5-0-0) in 1964 and conference runner-up honors (3-2-0) in 1965. Over those two years WSU football compiled a 12-3 overall record.

Walsh’s standout season for the Warriors came in 1965 when he scored eight touchdowns and 52 points – both figures are still on the top ten all-time list. Six of those TD’s came on pass receptions (another all-time top-ten figure), while two were running plays, ironically identical; 73-yard scampers against respective Elmhurst College, IL and Moorhead State teams. Walsh finished with 72 career points and 11 touchdowns, eight coming on 38 career pass receptions.

After completing his collegiate football eligibility, Walsh helped out the WSU football program as an assistant defensive coach. Walsh then left the Winona area and went to the Ft. Lauderdale, Fla., where he became a very successful high school head football coach and administrator for many years. Walsh was also a successful businessman before making a move to Asheville, North Carolina.