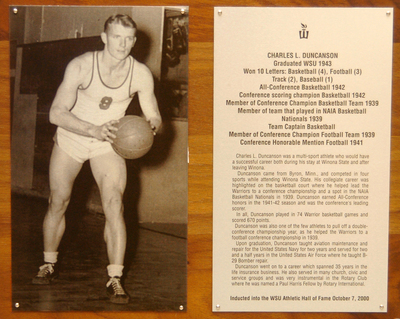 Charles L. Duncanson was a multi-sport athlete who would have a successful career both during his stay at Winona State and after leaving.

Duncanson came from Byron, Minn., and competed in four sports while attending Winona State. His collegiate career was highlighted on the basketball court where he helped lead the Warriors to a conference championship and a spot in the NAIA Basketball Nationals in 1939. Duncanson earned All-Conference honors in the 1941-42 season and was the conference-leading scorer.

In all, Duncanson played in 74 Warrior basketball games and scored 670 points.

Upon graduation, Duncanson taught aviation maintenance and repair for the United States Navy for two years and served for two and a half years in the United States Air Force where he taught B-29 Bomber repair.

Duncanson went on to a career that spanned 35 years in the life insurance business. He also served in many church, civic and service groups and was very instrumental in the Rotary Club where Rotary International named him a Paul Hairris Fellow.