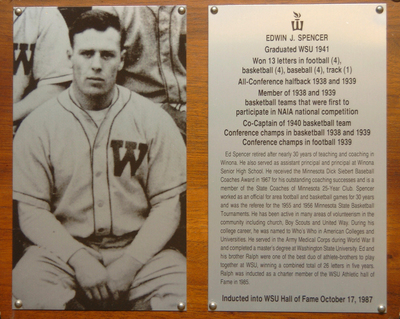 Ed Spencer retired after nearly 30 years of teaching and coaching in Winona. He also served as assistant principal and principal at Winona Senior High School. He also received the Minnesota Dick Siebert Baseball Coaches Award in 1967 for his outstanding coaching successes and is a member of the State Coaches of Minnesota 25-Year Club. Spencer worked as an official for area football and basketball games for 30 years and was the referee for the 1955 and 1956 Minnesota state basketball tournaments. He has been active in many areas of volunteerism in the community including church, Boy Scouts and United Way. During his college career, he was named to Who’s Who in American Colleges and Universities. He served in the Army Medical Corps during World War II and completed a master’s degree at Washington State University. Ed and his brother Ralph were one of the best duo of athlete-brothers to play together at WSU, winning a combined total of 26 letters in five years. Ralph was inducted as a charter member of the WSU athletic hall of fame in 1985.