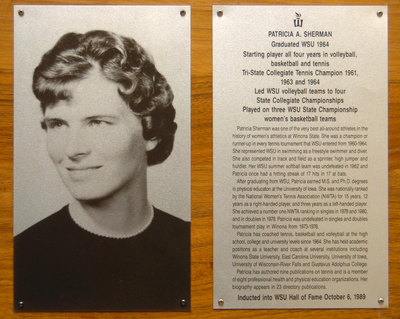 Patricia Sherman was one of the very best all-around athletes in the history of women’s athletics at Winona State. She was a champion or runner-up in every tennis tournament that WSU entered from 1960-1964. She represented WSU in swimming as a freestyle swimmier and diver. She also competed in track and field as a sprinter, high jumper and hurdler. Her WSU summer softball team was undefeated in 1962 and Patricia once had a hitting streak of 17 hits in 17 at bats.

After graduating from WSU, Patricia earned both M.S. and Ph. D degrees in physical education at the University of Iowa.

She was nationally ranked by the National Women’s Tennis Association (NWTA) for 15 years, 12 years as a right-handed player and three as a left-handed player. She achieved a number one NWTA ranking in singles in 1978 and 1980, and in doubles in 1978. Patricia was undefeated in singles and doubles tournament play in Winona from 1973-1976.

Patricia has coached tennis, basketball and volleyball at the high school, college and university levels since 1964. She has held academic positions as a teacher and coach at several institutions including Winona State University, East Carolina University, University of Iowa, University of Wisconsin-River Falls and Gustavus Adolphus College. Patricia has authored nine publications on tennis and is a member of eight professional health and physical education organizations. Her biography appears in 23 directory publications.

Starting player all four years in volleyball, basketball and tennis