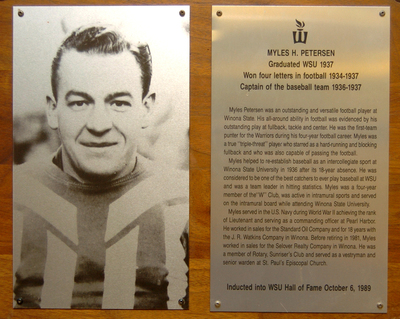 Myles Petersen: Hall of Fame Inductee Myles Peterson was an outstanding and versatile football player at Winona State. His all-around ability in football was evident by his outstanding play at Fullback, Tackle, and Center. He was the first-team punter for the Warriors during his four-year football career. Myles was a true “Triple Threat” player who started as a hard-running and blocking full back and was capable of passing the football. Myles helped re-establish baseball as an intercollegiate sport at WSU in 1936 after its 18 year absence. He was considered to be one of the best catchers to play at WSU and was a team leader in hitting statistics. Myles was a four year member of the W-club, was active in intramural sports and served on the intramural board while attending WSU. Myles served in the US Navy in World War II achieving rank of Lieutenant and serving as a commanding office in Pearl Harbor. He worked in sales in for Standard Oil Company and 18 years with the J.R. Watkins Company in Winona. Before retiring in 1981, Myles worked in sales for Selover Realty Company in Winona.

He was a member of Rotary, Sunriser’s Club and served as a vestryman and Senior Warden at St. Paul’s Episcopal Church.