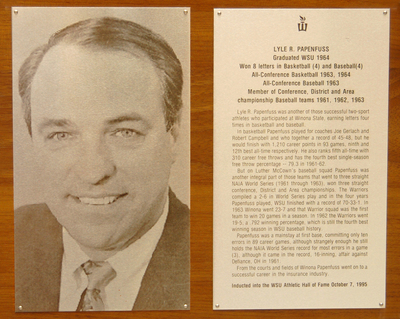 Lyle R. Papenfuss was another of those successful two-sport athletes who participated at Winona State, earning letters four times in basketball and baseball.

In basketball, Papenfuss played for coaches Joe Gerlach and Robert Campbell and who together a record of 45-48, but he would finish with 1,210 career points in 93 games, ninth and 12th best all-time respectively. He also ranks fifth all-time with 310 career free throws and has the fourth best single-season free throw percentage – 79.3 in 1961-62.

But on Luther McCown’s baseball squad Papenfuss was another integral part of those teams that went to three straight NAIA World Series (1961 through 1963), won three straight conference, district and area championships. The Warriors compiled a 2-6 in World Series play and in the four years Papenfuss played, WSU finished with a record of 70-33-1. In 1963 Winona went 23-7 and that Warrior squad was the first team to win 20 games in a season. In 1962 the Warriors went 19-5, a .792 winning percentage, which is still the fourth best winning season in WSU baseball history.

Papenfuss was a mainstay at first base, committing only ten errors in 89 career games, although strangely enough he still holds the NAIA World Series record for most errors in a game (3), although it came in the record. 16-inning affair against Defiance, OH in 1961.

From the courts and field of Winona, Papenfuss went on to a successful career in the insurance agency.