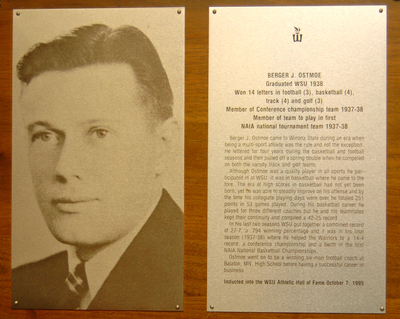 Berger J. Ostmoe came to Winona State during an era when being a multi-sport athlete was the rule and not the exception. He lettered for four years during the basketball and football seasons and then pulled off a spring double when he competed on both the varsity track and golf teams.

Although Ostmoe was a quality player in all sports he participated in at WSU, it was in basketball where he came to the fore. The era of high scores in basketball had not yet been born, yet he was able to steadily improve on his offense and by the time his collegiate playing days were over he totaled 251 points in 53 games played. During his basketball career he played for three different coaches but he and his teammates kept their continuity and compiled a 42-25 record.

In his last two seasons WSU put together a combined record of 27-7, a .794 winning percentage and it was in his final season (1937-38) where he helped the Warriors to a 14-4 record, a conference championship and a berth in the first NAIA National Basketball Championships.

Ostmoe went on the a winning six-man football coach at Balaton, MN High School before having a successful career in business.