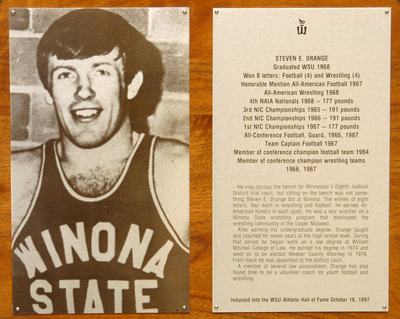 He may occupy the bench for Minnesota’s Eighth Judicial District trial court, but sitting on the bench was not something Steven E. Drange did at Winona State. The winner of eight letters, four each in wrestling and football, he earned All-American honors in each sport. He was a star wrestler on a Winona State wrestling team that dominated the wrestling community in the Upper Midwest.

After earning his undergraduate degree, Drange taught and coached for seven years at the high school level. During that period he began to work on his law degree at William Mitchell College of Law. He earned his degree in 1974 and went on to be elected Meeker County Attorney in 1978. From there he was appointed to the district court.

A member of several law associations, Drange has also found time to be a coach for youth football and wrestling.