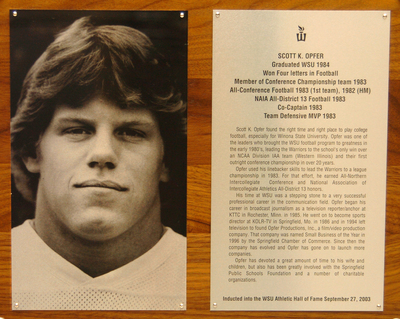 Scott K. Opfer found the right time and right place to play college football, especially for Winona State University. Opfer was one of the leaxders who brought the WSU football program to greatness in the early 1980’s, leading the Warriors to the school’s only win over an NCAA Division IAA team (Western Illinois) and their first outright conference championship in over 20 years.

Opfer used his linebacker skills to lead the Warriors to a league championship in 1983. For that effort, he earned All-Northern Intercollegiate Conference and National Association of Intercollegiate Athletics All-District 13 honors.

His time at WSU was a stepping-stone to a very successful professional career in the communication field. Opfer began his career in broadcast journalism as a television reporter/anchor at KTTC in Rochester, Minn. in 1985. He went on to become sports director at KOLR-TV in Springfield, MO in 1986 and in 1994 left television to found Opfer Productions, Inc., a film/video production company. The Springfield Chamber of Commerce named that company Small Business of the Year in 1996. Since then the company has evolved and Opfer has gone on to launch more companies.
Opfer has devoted a great amount of time to his wife and children, but also has been greatly involved with the Springfield Public Schools Foundation and a number of charitable organizations.