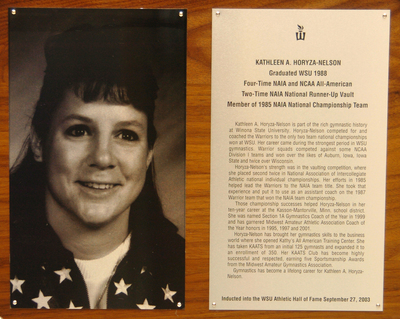 Kathleen A. Horyza-Nelson is part of the rich gymnastic history at Winona State University and has transformed her love of the sport into a lifelong career. As a team member, Horyza-Nelson helped lead the Warriors to the 1985 NAIA team title and later led the Warriors to their second national championship as an assistant coach in 1987. Her career came during the strongest period in WSU gymnastics. Warrior squads competed against some NCAA Division I teams and won over the likes of Auburn, Iowa, Iowa State and twice over Wisconsin.

Horyza-Nelson’s strength was in the vaulting competition, where she placed second twice in the National Association of Intercollegiate Athletic national individual championships.

These championship successes helped Horyza-Nelson in her ten-year career at the Kasson-Mantorville, Minn. school district. She was named Section 1A Gymnastics Coach of the Year in 1999 and has garnered Midwest Amateur Athletic Association Coach of the Year honors in 1995, 1997 and 2001.

Horyza-Nelson has brought her gymnastics skills to the business world where she opened Kathy’s All American Training Center. She has taken KAATS from an initial 125 gymnasts and expanded it to an enrollment of 350. Her KAATS Club has become highly successful and respected, earning five sportsmanship awards from the Midwest Amateur Gymnastics Association.