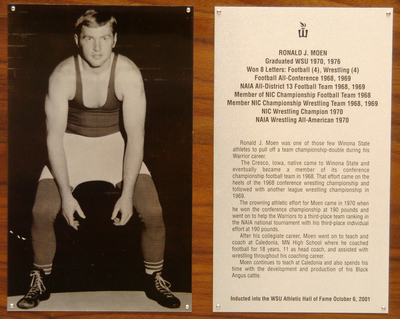 Ronald J. Moen was one of those few Winona State athletes to pull off a team championship-double during his Warrior career.

The crowning athletic effort for Moen came in 1970 when he won the conference championship at 190 pounds and went on to help the Warriors to third-place team ranking in the NAIA national tournament with his third-place individual effort at 190 pounds.

After his collegiate career, Moen went on to teach and coach at Caledonia, MN High School where he coached football for 18 years, 11 as head coach, and assisted with wrestling through his coaching career.

Moen continues to teach at Caledonia and also spends his time with the development and production of his Black Angus cattle.