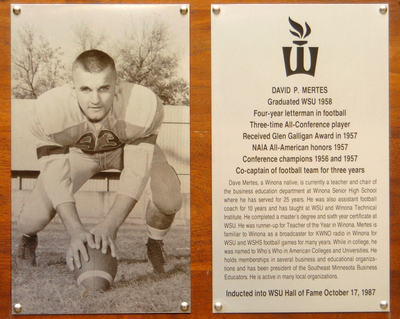 Dave Mertes, a Winona native, is currently a teacher and chair of the business education department at Winona Senior High School where he has served for 25 years. He was also assistant football coach for 10 years and has taught at WSU and Winona Technical Institute. He completed a master’s degree and sixth year certificate at WSU. He was runner-up for Teacher of the Year in Winona.

Mertes is familiar to Winona as a broadcaster for KWNO radio in Winona for WSU and WSHS football games for many years. While in college, he was named to Who’s Who in American Colleges and Universities. He holds memberships in several business and educational organizations and has been president of the Southeast Minnesota Business Educators. He is active in many local organizations.