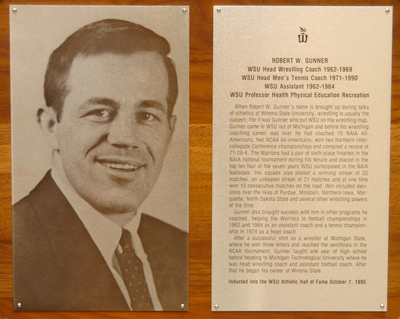 When Robert W. Gunner’s name is brought up during talks of athletics at Winona State University, wrestling is usually the subject. For it was Gunner who put WSU on the wrestling map. Gunner came to WSU out of Michigan and before his wrestling coaching career was over he had coached 15 NAIA All-Americans, two NCAA All-Americans, won two Northern Intercollegiate Conference championships and compiled a record of 71-28-4. The Warriors had a pair of sixth-place finishes in the NAIA national tournament during his tenure and placed in the top ten four of the seven years WSU participated in the NAIA Nationals. His squads also posted a winning streak of 20 matches; an unbeaten streak of 21 matches and at one time won 13 consecutive matches on the road. Wins included decisions over the likes of Purdue, Missouri, Northern Iowa, Marquette, North Dakota State and several other wrestling powers of the time.

Gunner also brought success with him in other programs he coached, helped the Warriors to football championships in 1962 and 1964 as an assistant coach and a tennis championship in 1974 as a head coach.

After a successful stint as a wrestler at Michigan State, where he won three letters and reached the semifinals in the NCAA tournament, Gunner taught one year of high school before heading to Michigan Technological University where he was head wrestling coach and assistant football coach. After that he began his career at Winona State.