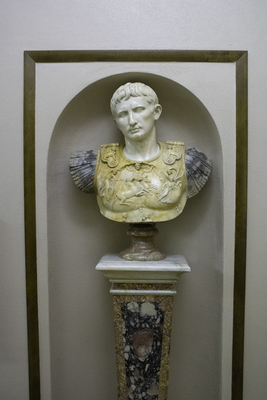 This 19th century bust represents the first and most lauded Roman Emperor, Augustus (reign, 27 BCE-14 CE). He was the grand-nephew and adopted son of Julius Caesar and a contemporary of the orator Cicero. He expanded the Roman Empire mainly through diplomacy while establishing a census, reforming taxation, and installing an enormous infrastructure plan in Rome. This copy may draw inspiration from multiple sources. The cuirass (chestplate) copies that of the famous Prima Porta Augustus statue (now in the Vatican Museum). Meanwhile, the head is of different style from the Prima Porta Augustus, and could have been inspired by any number of the emperor's portraits in Rome. The rendering of the head is stylistically similar to a bust of the Emperor Hadrian in this series: the features are smooth and simple, and the eyes have no pupils.