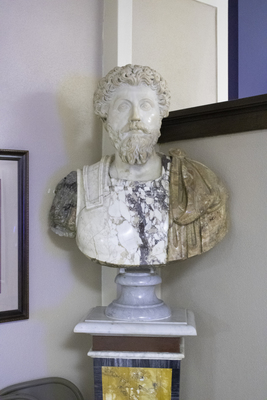 This 19th century bust represents the Roman Emperor Marcus Aurelius (reign, 161-180). Though he was involved with many military campaigns throughout his reign--which included the complete destruction of the Germanic Marcomanni peoples--he was known to have a calm disposition and preferred to spend his time studying philosophy. He wrote the Meditationes, a personal series of writings about his thoughts on Stoic philosophy. His son Commodus would be notoriously cruel. Stylistically this bust is similar to the one depicting Septimius Severus in this series: their pupils are incised and gaze upwards and careful detail is given to their head and facial hair. Sculptors may have referenced a number of different original late 2nd-early 3rd century CE portraits in Rome when creating these two busts.