Portrait Bust of Emperor Hadrian with a Pedestal 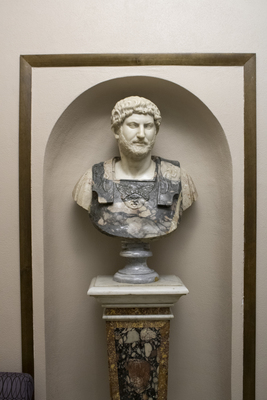 This 19th century bust depicts the Roman Emperor Hadrian (reign, 117-138). He is easily identifiable by his beard, the ringlets in his hair, and his full cheeks. The bust draws inspiration from 2nd c. CE marble and bronze originals that can now be found in the the Capitoline Museum (Rome, Italy). In this portrait his breastplate (also called a cuirass) features a winged Gorgon head and bearded, a depiction of Triton on either lapel. As an emperor, he is most known for his love of travel and Greek literature, an era of peace under his reign, and his romantic relationship with the man Antinous of Bithynia.