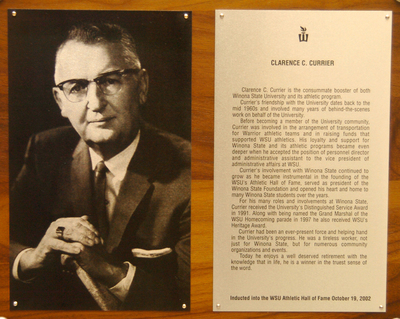 Clarence C. Currier is the consummate booster of both Winona State University and its athletic program.

Currier's friendship with the University dates back to the mid 1960s and involved many years of behind-the-scenes work on behalf of the University.

Before becoming a member of the University community, Currier was involved in the arrangement of transportation for Warrior athletic teams and in raising funds that supported WSU athletics. His loyalty and support for Winona State and its athletic programs became even deeper when he accepted the position of personnel director and administrative assistant to the vice president of administrative affairs at WSU.

Currier's involvement with Winona State continued to grow as he became instrumental in the founding of the WSU's Athletic Hall of Fame, served as president of the Winona State Foundation and opened his heart and home to many Winona State students over the years.

For his many roles and involvements at Winona State, Currier received the University's Distinguished Service Award in 1991. Along with being named the Grand Marshal of the WSU Homecoming parade in 1997 he also received WSU's Heritage Award.

Currier had been an ever-present force and helping hand in the University's progress. He was a tireless worker, not just for Winona State, but for numerous community organizations and events.

Today he enjoys a well deserved retirement with the knowledge that in life, he is a winner in the truest sense of the word.