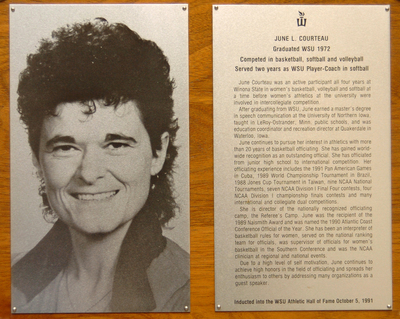 June Courteau was an active participant all four years at Winona State in women’s basketball, volleyball and softball at a time before women’s athletics at the university were involved in intercollegiate competition.

After graduating from WSU, June earned a master’s degree in speech communication at the University of Northern Iowa, taught in LeRoy-Ostrander, MN public schools, and was education coordinator and recreation director at Quakerdale in Waterloo, IA.

June continues to pursue her interest in athletics with more than 20 years of basketball officiating. She has gained world-wide recognition as an outstanding official. She has officiated from junior high school to intercollegiate competition. Her officiating experience includes the 1991 Pan American Games in Cuba, 1989 World Championship Tournament in Brazil, 1988 Jones Cup Tournament in Taiwan, nine NCAA National Tournaments, seven NCAA Division I Final Four Contests, four NCAA Division I championship finals contests and many international and collegiate dual competitions.

She is director of the nationally recognized officiating camp, the Referee’s Camp. June was the recipient of the 1989 Naismith Aware and was named the 1990 Atlantic Coast Conference Official of the Year. She has been interpreter of basketball ruled for women, served on the national ranking team for officials, was supervisor of officials for women’s basketball in the Southern Conference and was the NCAA clinician at regional and national events.

Due to a high level of motivation, June continues to achieve high honors in the field of officiating and spreads her enthusiasm to others by addressing many organizations as a guest speaker.