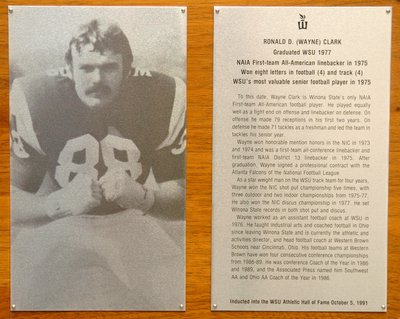 Wayne Clark is one of Winona State’s only NAIA First-team All-American football players. He played equally well as a tight end on offense as he did a linebacker on defense. On offense he had 79 receptions in his first two years. On defense he made 71 tackles as a freshman and led the team in tackles his senior season.

Wayne won honorable mention honors in the NIC in 1973 and 1974 and was a first team all-conference linebacker and first team NAIA District 13 linebacker in 1975. After graduation, Wayne signed a professional contract with the Atlanta Falcons of the National Football League.

As a star weight man on the WSU track team for four years, Wayne won the NIC shot put championship on five occasions, with three outdoor and two indoor championships from 1975-77. He also won the NIC discus championship in 1977. He set Winona State records in both the shot put and discus.

Wayne worked as an assistant football coach at WSU in 1976. He taught industrial arts and coached football in Ohio since leaving Winona State and is currently the athletic/activities director and head football coach at Western Brown Schools near Cincinnati, Ohio. His football teams at Western Brown have won four consecutive conference championships from 1986-89. He was conference Coach of the Year in 1986 and 1989, and the Associated Press named him Southwest AA and Ofio AA Coach of the Year in 1986.