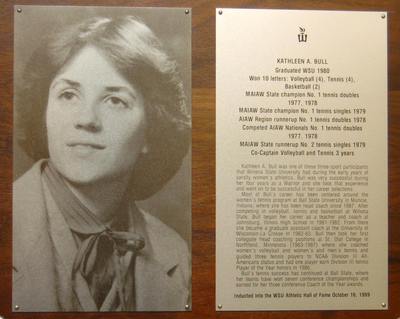 Kathleen A. Bull was one of those three-sport participants that Winona State University had during the early years of varsity women’s athletics. Bull was very successful during her four years as a Warrior and she took that experience and went on to be successful in her career selections.

Most of Bull’s career has been centered around the women’s tennis program at Ball State University in Muncie, Indiana, where she has been head coach since 1987. After competing in volleyball, tennis and basketball at Winona State, Bull began her career as a teacher and coach at Johnsburg High School (IL) in 1981-82. From there she became a graduate assistant coach at the University of Wisconsin-La Crosse in 1982-83. Bull then took her first collegiate head coaching position at St. Olaf College in Northfield, MN (1983-83) where she coached women’s volleyball and women’s/men’s tennis and guided three tennis players to NCAA Division III All-America Status, and had one player earn Division III tennis Player of the Year honors in 1986.

Bull’s tennis success has continued at Ball State, where her teams have won seven conference championships and earned her Coach of the Year honors three times.