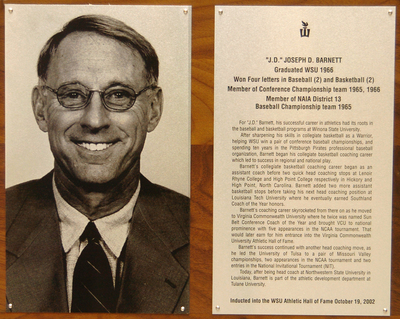 For “J.D.” Barnett, his successful career in athletics had its roots in the baseball and basketball programs at Winona State University.

After sharpening his skills in collegiate basketball as a Warrior, helping WSU win a pair of conference baseball championships, and spending ten years in the Pittsburgh Pirates professional baseball organization, Barnett began his collegiate basketball coaching career which led to success in regional and national play.

Barnett’s success continued with another head coaching move, as he led the University of Tulsa to a pair of Missouri Valley championships, two appearances in the NCAA Tournament and two entries in the National Invitational Tournament (NIT).

Today, after being head coach at Northwestern State University in Louisiana, Barnett is part of the athletic development department at Tulane University.