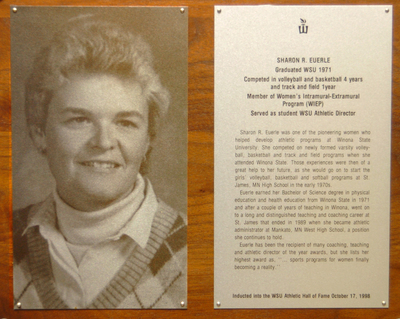 Sharon R. Euerle was one of the pioneering women who helped develop athletic programs at Winona State University. She competed on newly formed varsity volleyball, basketball and track and field programs when she attended Winona State. Those experiences were then of a great help to her future, as she would go on to start the girls’ volleyball, basketball and softball programs at St. James, MN High School in the early 1970’s.

Euerle earned her Bachelor of Science degree in physical education and health education from Winona State in 1971 and after a couple of years of teaching in Winona, went on to a long and distinguished teaching and coaching career at St. James that ended in 1989 when she became athletic administrator at Mankato, MN West High School, a position she continues to hold.

Euerle has been the recipient of many coaching, teaching and athletic director of the year awarded, but she lists her highest award as, “… sports programs for women finally becoming a reality.”