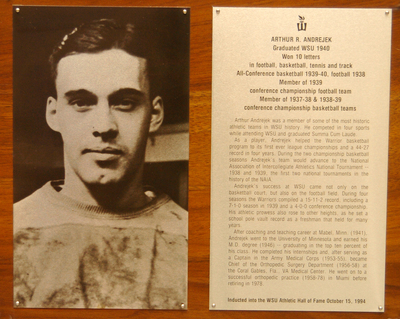 As a player, Andrejek helped the Warrior basketball program to its first ever league championships and a 44-27 record in four years. During the two championship basketball seasons Andrejek’s team would advance to the National Association of Intercollegiate Athletics National Tournament in 1938 and 1939—the first two national tournaments in the history of the NAIA.

Andrejek’s success at WSU came not only on the basketball court, but also on the football field. During four seasons the Warriors compiled a 15-11-2 record, including a 7-1-0 season in 1939 and a 4-0-0 conference Championship record. His athletic prowess also rose to other heights, as he set a school pole vault record as a freshman that help for many years.

After a coaching and teaching career in Mabel, Minn. (1941), Andrejek went to the University of Minnesota and earned his M.D. degree (1946)—graduating in the top ten percent of his class. He completed his internships and, after serving as a Captain in the Army Medical Corps (1953-54), became Chief of the Orthopedic Surgery Department (1956-58) at Corals Gables, Fla., VA Medical Center. He went on to a successful orthopedic practice (1958-78) in Miami before retiring in 1978.