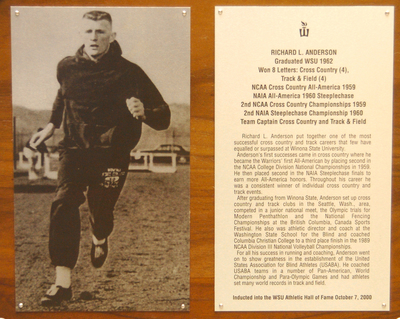 Richard L. Anderson put together one of the most successful cross country and track careers that few have equaled or surpassed at Winona State University. Anderson’s first successes came in cross country where he became the Warriors’ first All-American by placing second in the NCAA College Division National Championships in 1959. He then placed second in the NAIA Steeplechase finals to earn more All-America honors. Throughout his career he was a consistent winner of individual cross country and track events. After graduating from Winona State, Anderson set up cross country and track clubs in the Seattle, Wash. Area, competed in a junior national meet, the Olympic trials for Modern Pentathlon and the National Fencing Championships at the British Columbia, Canada Sports Festival. He also was athletic director and coach at the Washington State School for the Blind and coached Columbia Christian College to a third place finish in the 1989 NCAA Division II National Volleyball Championships. For all his success in running and coaching, Anderson went on to show greatness in the establishment of the United States Association for Blind Athletes (USABA). He coached USABA teams in a number of Pan-American, World Championship and Para-Olympic Games and had athletes set many world records.