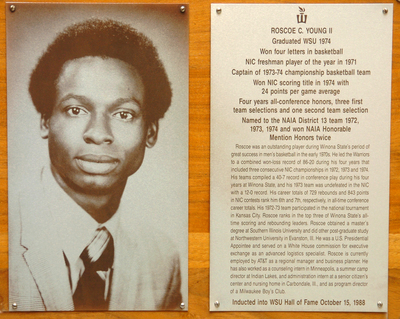 Roscoe was an outstanding player during Winona State’s period of great success in men’s basketball in the early 1970’s. He left the Warriors to a combined won-loss record of 86-20 during his four years that included three consecutive NIC championships in 1972, 1973 and 1974. His teams compiled a 40-7 record in conference play during his four years at Winona Sate, and his 1973 team was undefeated in the NIC with a 12-0 record. His career totals of 729 rebounds and 843 points in NIC contests rank him 6th and 7th, respectively, in all-time conference career totals. His 1972-73 team participated in the national tournament in Kansas City. Roscoe ranks in the top three of Winona State’s all-time scoring and rebounding leaders. Roscoe obtained a master’s degree at Southern Illinois University and did other post-graduate study at Northwestern University in Evanston, Ill. He was a U.S. Presidential Appointee and served on a White House commission for executive exchange as an advanced logistics specialist. Roscoe is currently employed by AT&T as a regional manager and business planner. He has also worked as a counseling intern in Minneapolis, a summer camp director at Indian Lakes, and administration intern at a senior citizen’s center and nursing home in Carbondale, Ill., and as a program of a Milwaukee Boy’s Club.