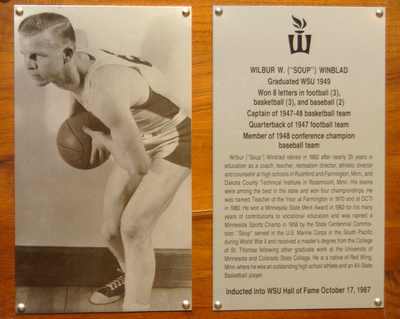 Wilbur (“Soup”) Winblad retired in 1982 after nearly 35 years in education as a coach, teacher, recreation director, athletic director and counselor at high schools in Rushford and Farmington, Minn., and Dakota County Technical Institute in Rosemount, Minn. His teams were among the best in the state and won four championships. He was named Teacher of the Year at Farmington in 1970 and at DCTI in 1980. He won a Minnesota State Merit Award in 1982 for his many years of contributions to vocational education and was named a Minnesota Sports Champ in 1958 by the State Centennial Commission. “Soup” served in the U.S. Marine Corps in the South Pacific during World War II and received a master’s degree from the college of St. Thomas following other graduate work at the University of Minnesota and Colorado State College. He is a native of Red Wing, Minn. where he was an outstanding high school athlete and an All-State Basketball player.