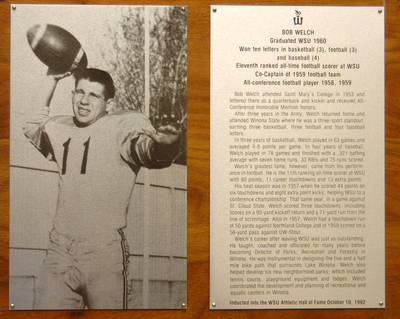 Bob Welch attended Saint Mary’s College in 1953 and lettered there as a quarterback and kicker and received All-Conference Honorable Mention honors.

After three years in the Army, Welch returned home and attended Winona State where he was a three-sport standout, earning three basketball, three football and four baseball letters.

Welch’s greatest fame, however, came from his performance in football. He is the 11th ranking all-time scorer at WSU with 80 points; 11 career touchdowns and 13 extra points. His best season was in 1957 when he scored 44 points on six touchdowns and eight extra point kicks, helping WSU to a conference championship. That same year in a game against St. Cloud State, Welch scored three touchdowns, including scores on a 90-yard kickoff return and a 71-yard run from the line of scrimmage. Also in 1957, Welch had a touchdown run of 50 yards against Northland College and in 1959 scored on a 56-yard pass against UW-Stout.

Welch’s career after leaving WSU was just as outstanding. He taught, coached and officiated for many years before becoming Director of Parks, Recreation and Forestry in Winona. He was instrumental in designing the five and a half mile bike path that surrounds Lake Winona. Welch also helped develop six new neighborhood parks, which included tennis courts, playground equipment and lodges. Welch coordinated the development and planning of recreational and aquatic centers in Winona.