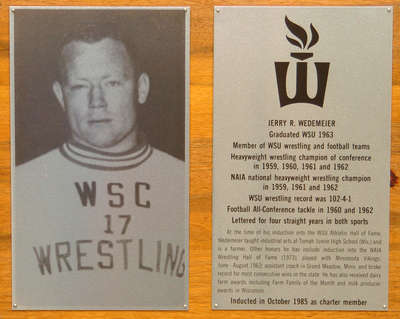 At the time of his induction into the WSU Athletic Hall Of Fame, Wedemeier taught industrial arts at Tomah Junior High School (Wis.) and was a farmer. Other honors he has include induction into the NAIA Wrestling Hall of Fame (1973); played with the Minnesota Vikings June-August 1963; assistant coach in Grand Meadow, Minn. and broke the record for most consecutive wins in the state. He has also received dairy farm awards including Farm Family of the month and milk producer awards in Wisconsin.

Lettered for four straight years in both sports