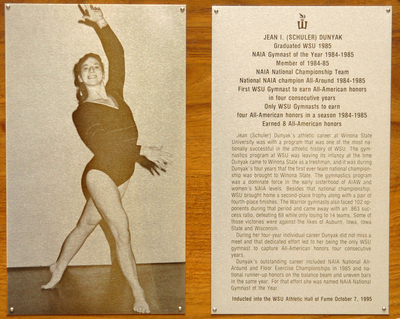 Jean (Schuler) Dunyak’s athletic career at Winona State University was with a program that was one of the most nationally successful in the athletic history of WSU. The gymnastics program at WSU was leaving its infancy at the time Dunyak came to Winona State as a freshman, and it was during Dunyak’s four years that the first ever team national championship was brought to Winona State. The gymnastics program was a dominant force in the early sisterhood of AIAW and women’s NAIA levels. Besides that national championship WSU brought home a second-place trophy along with a pair of fourth-place finishes. The Warrior gymnasts also faced 102 opponents during that period and came away with a .863 success ratio, defeating 88 while only losing to 14 teams. Some of those victories were against the likes of Auburn, Iowa, Iowa State and Wisconsin.

During her four-year individual career Dunyak did not miss a meet and that dedicated effort led to her to be the only WSU gymnast to capture All-American honors four consecutive years.

Dunyak’s outstanding career included NAIA National all-around and floor exercise championships in 1985 and national runner-up honors on the balance beam and uneven bars in the same year. For that effort she was named NAIA National Gymnast of the Year.