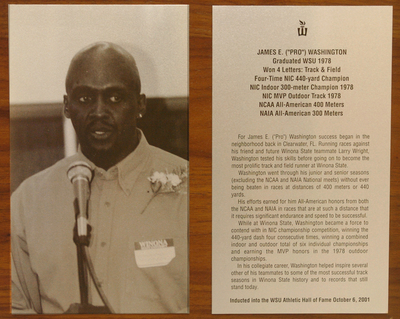 For James E. (“Pro”) Washington success began in the neighborhood back in Clearwater, FL. Running races against his friend and future Winona State teammate Larry Wright, Washington tested his skills before going on to become the most prolific track and field runner at Winona State.

Washington went through his junior and senior seasons (excluding the NCAA and NAIA national meets) without ever being beaten in races at distances of 400 meters or 440 yards.

His efforts earned for him All-American honors from both the NCAA and NAIA in races that are at such a distance that it requires significant endurance and speed to be successful.

While at Winona State, Washington became a force to contend with in NIC championship competition, winning the 440-yard dash four consecutive times, winning a combined indoor and outdoor total of six individual championships and earning the MVP honors in the 1978 outdoor championships.

In his collegiate career, Washington helped inspire several other of his teammates to some of the most successful track seasons in Winona State history and to records that still stand today.