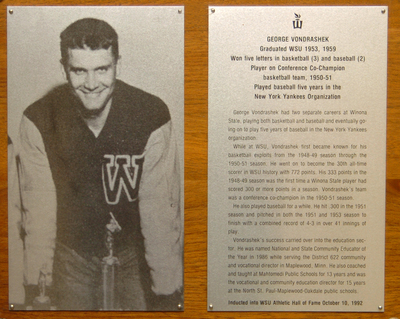 George Vondrashek had two separate careers at Winona State, playing both basketball and baseball and eventually going on to play five years of baseball in the New York Yankees organization.

While at WSU, Vondrashek first became known for his basketball exploits from the 1948-49 season through the 1950-51 season. He went on to become the 30th all-time scorer in WSU history with 772 points. His 333 points in the 1948-49 season was the first time a Winona State player had scored 300 or more points in a season. Vondrashek’s team was a conference co-champion in the 1950-51 season.

Vondrashek’s success carried over into the education sector. He was named National and State Community Educator of the Year in 1986 while serving the District 622 community and vocational director in Maplewood, Minn. He also coached and taught at Mahtomedi Public Schools for 13 years and was the vocational and community education director for 15 years at the North St. Paul-Maplewood-Oakdale public schools.