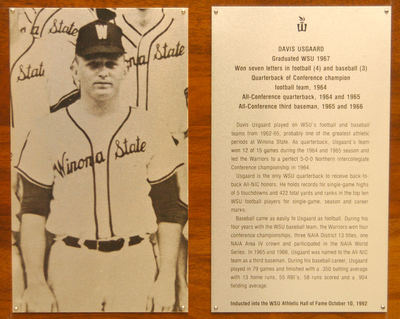 David Usgaard played on WSU’s football and baseball teams from 1962-65, probably one of the greatest athletic periods at Winona State. As a quarterback, Usgaard’s team won 12 of 15 games during the 1964 and 1965 season and led the Warriors to a perfect 5-0-0 Northern Intercollegiate Conference championship in 1964.

Usgarrd is the only WSU quarterback to receive back-to-back All-NIC honors. He holds records for single-game highs of 5 touchdowns and 422 total yards and ranks in the top ten WSU football players for single-game, season and career marks.

Baseball came as easily to Usgaard as football. During his four years with the WSU baseball team, the Warriors won four conference championships, three NAIA District 13 titles, one NAIA Area IV crown and participated in the NAIA World Series. In 1965 and 1966, Usgaard was named to the All-NIC teams as a third baseball. During his baseball career, Usgaard plated in 79 games and finished with a .350 batting average with 13 homeruns, 55 RBI’s, 58 runs scored and a .904 fielding average.