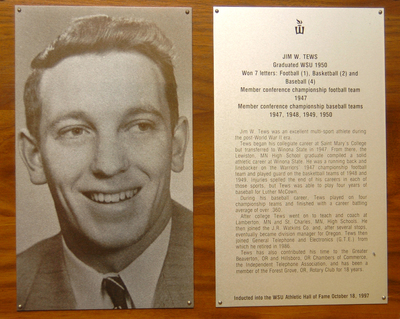 Tews began his collegiate career at Saint Mary’s College but transferred to Winona State in 1947. From there, the Lewiston, MN High School graduate compiled a solid athletic career at Winona State. He was a running back and linebacker on the Warriors 1947 championship football team. He also played guard on the basketball teams of 1948 and 1949. Injuries spelled the end of his careers in each of those sports, but Tews was able to play four years of baseball for Luther McCown.

During his baseball career, Tews played on four championship teams and finished with a career batting average of over .360.

After college Tews went on to teach and coach at Lamberton, MN and St. Charles, MN High Schools. He then joined the J.R. Watkins Co. and after several stops, eventually became division manager for Oregon. Tews then joined General Telephone and Electronic (G.T.E.) from which he retired in 1986.

Tews has also contributed his time to the Greater Beaverton, OR and Hillsboro, OR Chambers of Commerce, the Independent Telephone Association and has been a member of the Forest Grove, OR, Rotary Club for 18 years.