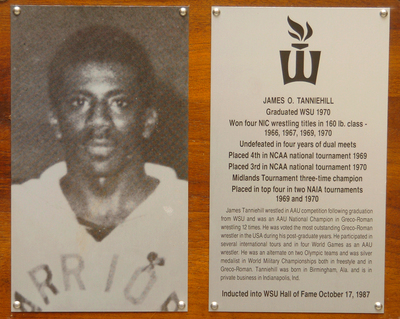 James Tanniehill wrestled in AAU competition following graduation from WSU and was an AAU National Champion in Greco-Roman wrestling 12 times. He was voted the most outstanding Greco-Roman wrestler in the USA during his post-graduate years. He participated in several international tours and in four world games as an AAU wrestler. He was an alternate on two Olympic teams and was a silver medalist in World Military Championships both in freestyle and in Greco-Roman. Tanniehill was born in Birmingham, Ala. and is in private business in Indianapolis, Ind.