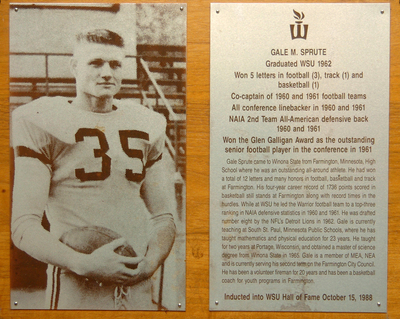 Gale Sprute came to Winona State from Farmington, Minnesota High School where he was an outstanding all-around athlete. He had won a total of 12 letters and many honors in football, basketball and track at Farmington. His four-year career record of 1,736 points scored in basketball still stands at Farmington along with record times in hurdles. While at WSU he led the Warrior football team to a top-three ranking in NAIA defensive statistics in 1960 and 1961. He was drafted number eight by the NFL’s Detroit Lions in 1962. Gale is currently teaching at South St. Paul, Minnesota Public Schools, where he has taught mathematics and physical education for 23 years. He taught for two years at Portage, Wisconsin, and obtained a master of science degree from Winona State in 1965. Gale is a member of MEA, NEA and us currently serving his second term on the Farmington City Council. He has been a volunteer fireman for 20 years and has been a basketball coach for youth programs in Farmington.