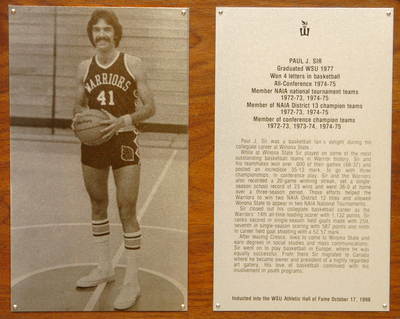 Paul J. Sir was a basketball fan’s delight during his collegiate career at Winona State.

While at Winona State, Sir played on some of the most outstanding basketball teams in Warrior history. Sir and his teammates won over 600 of their games (68-37) and posted an incredible 35-13 mark, to go with three championships, in conference play. Sir and the Warriors also recorded a 20-game winning streak, set a single-season school record of 23 wins and went 36-0 at home over a three-season period. Those efforts helped the Warriors to win two NAIA District 13 titles and allowed Winona State to appear in two NAIA national tournaments.

Sir closed out his collegiate basketball career as Warriors’ 14th all-time leading scorer with 1,132 points. Sir ranks second in single-season field goals made with 259 seventh in single season scoring with 587 points and ninth in career field goal shooting with a 53-57 mark.

After leaving Cresco, Iowa to come to Winona State and earn degrees in social studies and mass communications, Sit went on to play basketball in Europe, where he was equally successful. From there Sir migrated to Canada where he became owner and president of a highly regarded art gallery. His love of basketball continued with his involvement in youth programs.