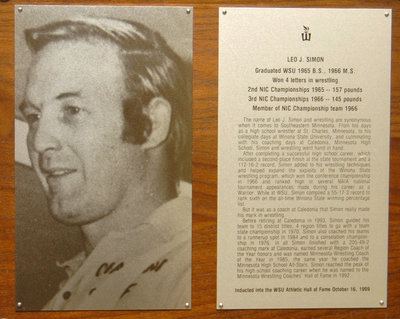 The name Leo J. Simon and wrestling are synonymous when it comes to Southeastern Minnesota. From his days as a high school wrestler at St. Charles, Minnesota to his collegiate days at Winona State University and culminating with his coaching days at Caledonia, Minnesota High School, Simon and wrestling went hand in hand.

After completing a successful high school career, which included a second-place finish at the state tournament and a 112-16-2 record, Simon added to his wrestling techniques and helped expand the exploits of the Winona State wrestling program which won the conference championship in 1966 and ranked high in several NAIA national tournament appearances made during his career as a Warrior. While at WSU, Simon compiled a 55-17-3 record to rank sixth on the all-time Winona State winning percentage list.

But it was as a coach that Simon really made his mark in wrestling.

Before retiring at Caledonia in 1993, Simon guided his team to 15 district titles, 4 region titles to go with a team state championship in 1970. Simon also coached his teams to a runner-up spot in 1984 and to a consolation championship in 1976. In all Simon finished with a 205-49-2 coaching mark at Caledonia, earned several Region Coach of the year honors and was named Minnesota Wrestling Coach of the year in 1985, the same year he coached the Minnesota High School All-Stars. Simon reached the peak of his high school coaching career when he was named to the Minnesota Wrestling Coaches’ Hall of Fame.