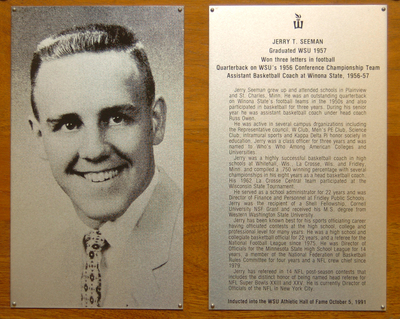 Jerry Seeman grew up and attended schools in Plainview and St. Charles, Minn. He was an outstanding quarterback on Winona State’s football teams in the 1950’s and also participated in basketball for three years. During his senior year he was assistant basketball coach under head coach Russ Owen.

He was active in several campus organizations including the Representative Council, W Club, Men’s PE Club, Science Club, intramural sports and Kappa Delta Ph honor society in education. Jerry was a class officer for three years and was named to Who's Who Among American Colleges and Universities.

Jerry was a highly successful basketball coach in high schools at Whitehall, Wis., La Crosse, Wis. And Fridley, Minn. and compiled a .750 winning percentage with several championships in his eight years as a head basketball coach. His 1962 La Crosse Central team participated at the Wisconsin state tournament.

He served as a school administrator for 22 years and was Director of Finance and Personnel at Fridley Public Schools. Jerry was the recipient of a Shell Fellowship, Cornell University NSF Grant and received his M.S. degree from Western Washington State University.

Jerry has been known best for his sports officiating career having officiated contests at the high school, college and professional level for many years. He was a high school and collegiate basketball official for 22 years, and a referee for the National Football League since 1975. He was Director of Officials for the Minnesota State High School league for 14 years, a member of the National Federation of Basketball Rules Committee for four years and a NFL crew chief since 1979.