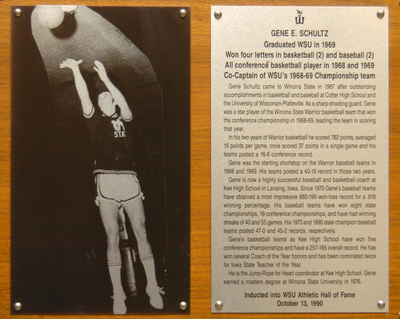 Gene Schultz came to Winona State in 1967 after outstanding accomplishments in basketball and baseball at Cotter High School and the University of Wisconsin-Platteville. As a sharp-shooting guard, Gene was a star player of the Winona State Warrior basketball team that won the conference championship in 1968-69, leading the team in scoring that year.

In his two years of Warrior basketball he scored 782 points, averaged 16 points per game, once scored 37 points in a single game and his teams posted a 16-8 conference record.

Gene was the starting shortstop on the Warrior baseball teams in 1968 and 1969. His teams posted a 40-19 record in those two years.

Gene’s basketball teams at Kee High School have won five conference championships and have a 257-185 overall record. He has won several Coach of the Year honors and has been nominated twice for Iowa State Teacher of the Year.

He is the Jump Rope for Heart coordinator at Kee High School. Gene earned a masters degree at Winona State University in 1976.