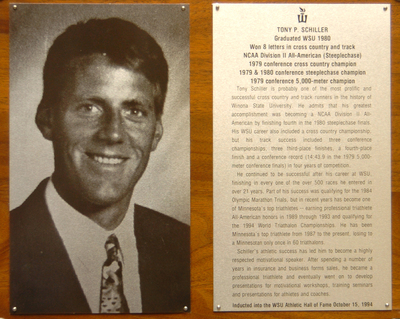 Tony Schiller is probably one of the most prolific and successful cross-country and track runners in the history of Winona State University. He admits that his greatest accomplishment was becoming a NCAA Division II All-American by finishing fourth in the 1980 steeplechase finals. His WSU career also included a cross-country championship but his track success included three conference championships, three third-place finishes, a fourth-place finish and a conference record (14:43:9 in the 1979 5,000 meter conference finals) in four years of competition.

He continued to be successful after his career at WSU, finishing in every one of the over 500 races he entered in over 21 years. Part of his success was qualifying for the 1984 Olympic Marathon Trials, but in recent years has become one of Minnesota’s top tri-athlete’s – earning professional tri-athlete All-American honors in 1989 through 1993 and qualifying for the 1994 World Triathlon Championships. He has been Minnesota’s top tri-athlete from 1987 to the present, losing to a Minnesotan only once in 60 triathlons.

Schiller’s athletic success has led him to become a highly respected motivational speaker. After spending a number of years in insurance and business forms sales, he became a professional tri-athlete and eventually went on to develop presentations for motivational workshops, training seminars and presentations for athletes and coaches.