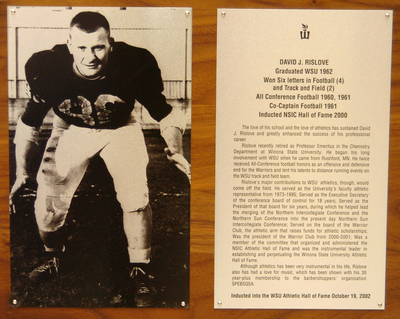 The love of his school and the love of athletics has sustained David J. Rislove and greatly enhanced the success of his professional career.

Rislove recently retired as Professor Emeritus in the Chemistry Department at Winona State University. He began his long involvement with WSU when he came from Rushford, MN. He twice received All-Conference football honors as an offensive and defensive end for the Warriors and lent his talents to distance running events on the WSU track and field team.

Rislove's major contributions to WSU athletics, though, would come off the field. He served as the University's faculty athletic representative from 1973-1995; Served as the Executive Secretary of the conference board of control for 18 years; Served as the President of that board for six years, during which he helped lead the merging of the Northern Intercollegiate Conference and the Northern Sun Conference into the present day Northern Sun Intercollegiate Conference; Served on the board of the Warrior Club, the athletic arm that raises funds for athletic scholarships; Was the president of the Warrior Club from 2000-2001; Was a member of the committee that organized and administered the NSIC Athletic Hall of Fame and was the instrumental leader in establishing and perpetuating the Winona State University Athletic Hall of Fame.

Although athletics has been very instrumental in his life, Rislove also has had a love for music, which has been shown with his 30 year-plus membership to the barbershoppers' organization SPEBSQSA.