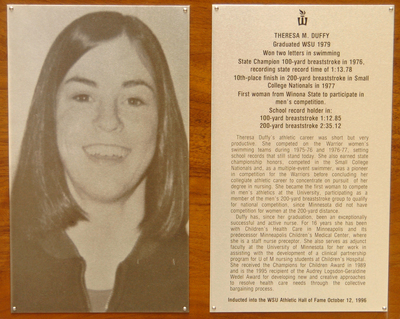 heresa Duffy’s athletic career was short but very productive. She competed on the Warrior women’s swimming team during 1975-76 and 1976-77, setting school records that still stand today. She also earned state championship honors, competed in the Small College Nationals. As a multiple-event swimmer, Duffy was a pioneer in competition for the Warriors before concluding her collegiate athletic career to concentrate on the pursuit of her degree in nursing. She became the first woman to compete in men’s athletics at the University, participating as a member of the men’s 200-yard breaststroke group to qualify for national competition, since Minnesota did not have competition for women at the 200-yard distance.

Duffy has, since her graduation, been a successful and active nurse. For 16 years she has been with Children’s Health Care in Minneapolis and its predecessor Minneapolis Children’s Medical Center, where she is a staff nurse preceptor. She also serves as adjunct faculty at the University of Minnesota for her work in assisting with the development of a clinical partnership program for U of M nursing students at Children’s Hospital. She received the Champions for Children Award in 1989 and is the 1995 recipient of the Audrey Logsdon-Geraldine Wedel Award for developing new and creative approaches to resolve health care needs through the collective bargaining process.

First woman from Winona State to participate in men’s competition