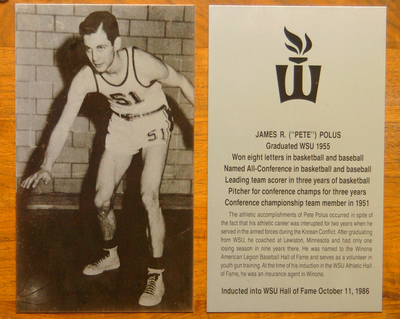 The athletic accomplishment of Pete Polus occurred in spite of the fact that his athletic career was interrupted for 2 years when he served in the armed forces during the Korean Conflict. After graduating from WSU, he coached in Lewiston, MN and had only one losing season in nine years there. He was named to the Winona American Legion Baseball Hall of Fame and serves as a volunteer in youth gun training. At the time of his induction to the WSU Athletic Hall of Fame, he was an insurance agent in Winona.

Won 8 letters in Basketball and Baseball