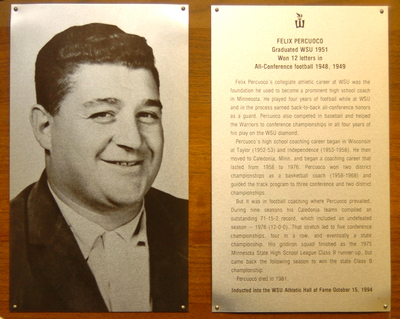 Felix Percuoco’s collegiate athletic career at WSU was the foundation he used to become a prominent high school coach in Minnesota. He played four years of football while at WSU and in the process earned back-to-back all-conference honors as a guard. Percuoco also competed in baseball and helped the Warriors to conference championships in all four years of his play on the WSU diamond.

Percuoco’s high school coaching career began in Wisconsin at Taylor (1952-53) and Independence (1953-1958). He then moved to Caledonia, Minn. and began a coaching career that lasted from 1958 to 1976. Percuoco won two district championships as a basketball coach (1958-1968) and guided the track program to three conference and two district championships.

But it was in football coaching where Percuoco prevailed. During nine seasons his Caledonia teams compiled an outstanding 71-15-2 record, which included an undefeated season – 1976 (12-0-0). That stretch led to five conference championships, four in a row, and eventually a state championship. His gridiron squad finished as the 1975 Minnesota State High School League Class B runner-up, but came back the following season to win the state Class B championship.