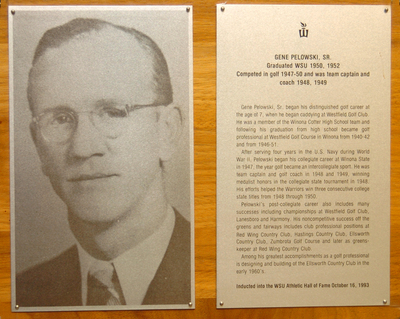 Gene Pelowski, Sr. began his distinguished golf career at the age of 7, when he began caddying at Westfield Golf Club. He was a member of the Winona Cotter High School team and following his graduation from high school became golf professional at Westfield Golf Course in Winona from 1940-42 and from 1946-51.

After serving four years in the U.S. Navy during World War II, Pelowski began his collegiate career at Winona State in 1947; the year golf became an intercollegiate sport. He was team captain and golf coach in 1948 and 1949, winning medalist honors in the collegiate state tournament in 1948. His efforts helped the Warriors win three consecutive college state titles from 1948 through 1950.

Among his greatest accomplishments as golf professional is designing and building of the Ellsworth Country Club in the early 1960’s.