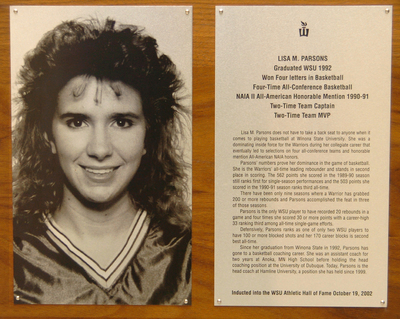 Lisa M. Parsons does not have to take a back set to anyone when it comes to playing basketball at Winona State University. She was a dominating inside force for the Warriors during her collegiate career that eventually led to selections on four all-conference teams and honorable mention All-American NAIA honors.

Parsons’ numbers prove her dominance in the game of basketball. She is the Warriors’ all-time leading rebounder and stands in second place in scoring. The 562 points she scored in the 1989-90 season still ranks first for single-season ranks, third all-time.

There have been only nine seasons where a Warrior has grabbed 200 or more rebounds and Parsons accomplished the feat in three of those seasons.

Parsons is the only WSU player to have recorded 20 rebounds in a game and four times she scored 30 or more points with a career-high 33, ranking third among all-time single-game efforts.

Defensively, Parsons ranks as one of only two WSU players to have 100 or more blocked shots and her 170 career blocks is second best all-time.

Since her graduation from Winona State in 1992, Parsons has gone to a basketball coaching career. She was an assistant coach for two years at Anoka, MN High School before holding the head coaching position at the University of Dubuque. Today, Parsons is the head coach at Hamline University, a position she has held since 1999.